Scientists say tour groups that approach Hawaii’s spinner dolphins are disturbing the daytime sleeping habits of the nocturnal hunters.
HONOLULU, Hawaii — Federal regulators are proposing a ban on the popular Hawaii tourist activity of swimming with spinner dolphins out fear that the practice is disrupting the daytime sleeping patterns of the nocturnal hunters.
The dolphins swim into bays along the coast of the Hawaiian Islands to sleep for most of the day, and then move into the deep-ocean small fish and other prey that rise from the depths at night. The National Oceanic and Atmospheric Administration saysboats that take tourists to swim with the dolphins are actually inhibiting their sleep, although it may be hard for people to tell since the animals continue to swim and keep their eyes open.
NOAA’s proposal, released on Tuesday, would ban being within 50 yards of spinner dolphins, with some exceptions if they approach you, and apply to the 2 nautical miles around the main Hawaiian Islands. 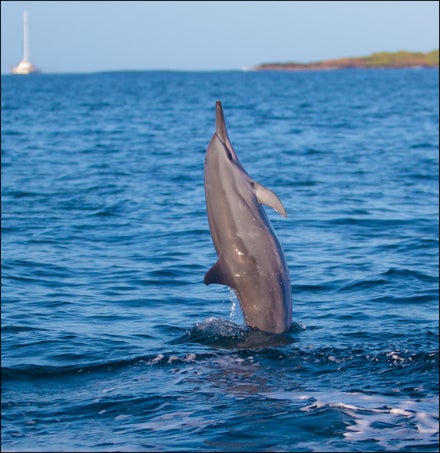 Ludovic Hirlimann / Via Flickr: hirlimann
“Dolphin-directed activities have grown dramatically in recent years, and the easily accessible Hawaiian spinner dolphins face heavy and increasing pressures from people seeking a dolphin experience,” NOAA said in a statement.
The Honolulu Star-Advertiser reportedthat there are more than 200 dolphin-related tourism businesses operating in the state, and they will likely be heavily impacted by the new regulation.
However, Claudia Merrill, co-owner of Dolphin Discoveries on the Big Island, said she was OK with protecting dolphins during their rest hours.
“It should be a sustainable industry,” Merrill told the Star-Advertiser. “It can be a sustainable industry.”
Spinner dolphins get their name for their amazing above-water shows, and are especially known for being able to leap 14 times in a row.
Ann Garrett, who works for the National Marine Fisheries Service, told BuzzFeed News that tour operators would still be able to view the animals “but at a distance that would cause less disturbance and still allow for a rewarding dolphin encounter.”
An additional rule to prohibit activities during the dolphin’s prime sleep time in tourist-heavy areas, such as Big Island’s Kealakekua Bay and Maui’s La Perouse Bay, is also being considered.
NOAA has a two month period to consider public input and said the prohibitions, if approved, would go into effect next year.
Michelle Broder Van Dyke is a reporter and night editor for BuzzFeed News and is based in Hawaii.
Contact Michelle Broder Van Dyke at michelle@buzzfeed.com.