Skip to main content
By Derik Lattig Cats - July 10, 2017
#DerikLattig says check out this information on vintage neon clocks. I have owned plenty of these and they are beautiful.
Information from http://www.neonclock.org/Pages/Manufacturer/ENCC/ENCC%20History.htm

Sources: Primarily e-mail communication from Ron Winger, son of the founder of The Electric Neon Clock Company.  Also, available sales brochures were utilized to confirm model names and numbers.
The history of the company:
The Founder: Mannie E. Winger, founder of The Electric Neon Clock Company, was born in Presov, Austria-Hungary in 1899 (current country of Slovakia, formerly known as Czechoslovakia).  He came to America at about the age of 5, and after the eighth grade he had to go to work and self taught himself from then on.
At about the age 29 he lost a good job but had a little money and no family to support.  He decided to take a cruise ship around the world and only heard about the start of the great depression while in India.  When he got back to New York some Clevelanders were there to meet him.  They had an idea about starting an advertising oriented clock company in Cleveland.   That was the start.
One of the earliest big sales was to the Lowe’s movie chain.  Mannie created the first of his win-win sales.  The movie theatre got a clock over the exit door with “Exit” on it. The top of the clock had a changeable merchant advertisement space which the theatre used as income to pay for the clock.  However, to make this sale he had to sit in a buyers waiting room a whole week.  At the end, Mannie’s persistence paid off and he made the sale. 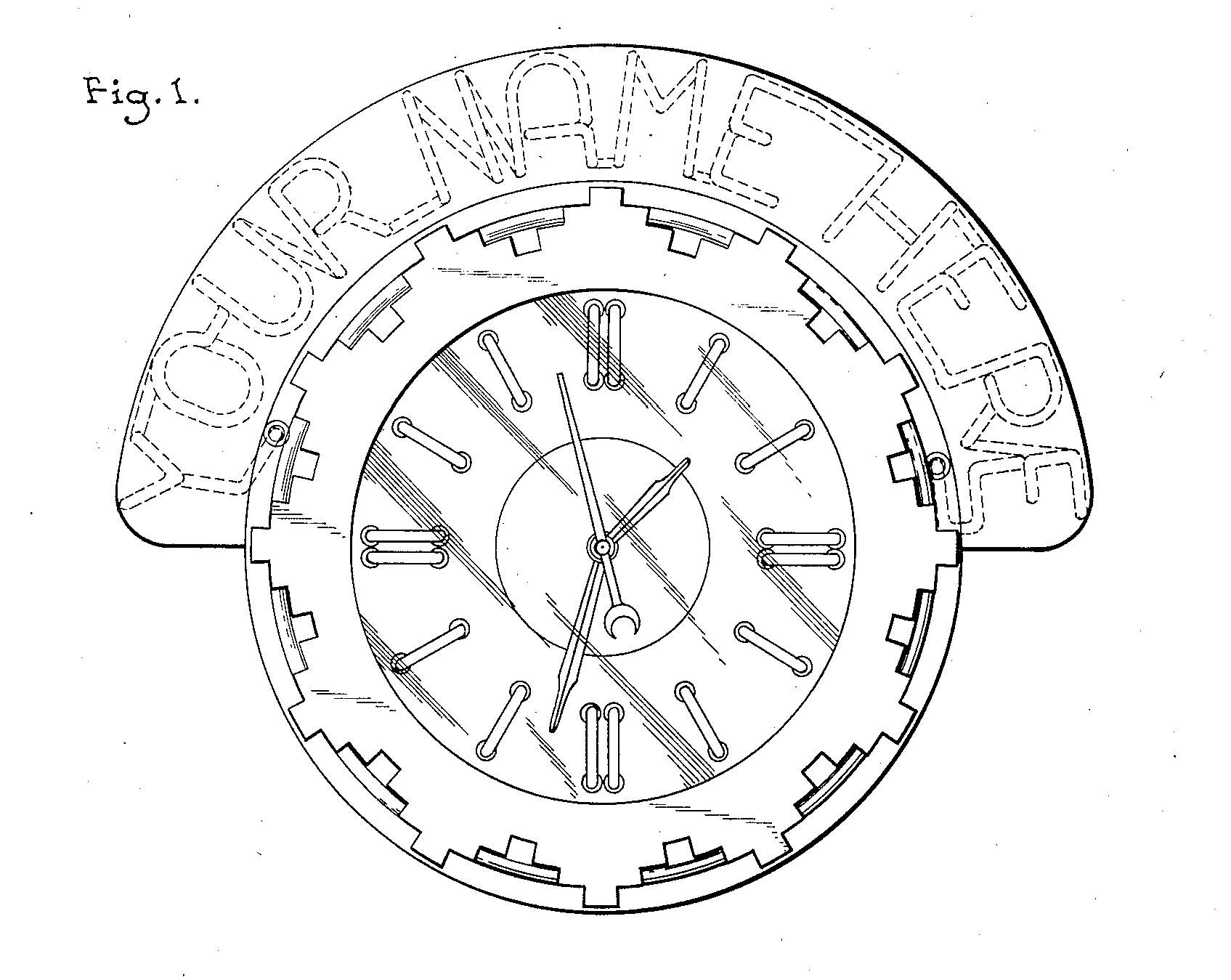 The "Cleveland" name: The Electric Neon Clock Co. was never known as "Cleveland Clocks" while the company was in business.  That is a current fabrication, probably due to the long, and rather generic, company name. This is similar to why some people in the industry refer to Neon Products clocks as "Lima" clocks.
Marketing the clocks: Typically a salesman would have 8 or 10 clocks shipped to them by Railway Express to some town or another.  He would then load them into his salesmen special car.  The cars were typically driven 100,000 miles in a year.  They were then brought back to Cleveland for the big sales meeting and the representatives would get another car.  The reps drove around to small towns through out America to make their sales.  The down payment was his to keep as his commission on the sale. The salesman would install the clock then and there.  Permits were rarely required.  The balance was paid by mail at a rate of $10.00 per month.  Interest was not charged.  However, excessive non-payment resulted in your clock just disappearing during the night.  The repossessed clock were sent back to the factory and the good parts were reused.
The clocks were sometimes sold to beverage companies like Pepsi, or Dr. Pepper etc. and the cola salesmen would give them away in order to get the retailer to switch to their soft drink.  In another marketing version the clock was sold to the retailer but he got his money back in free products  from the soft drink manufacturer.
The round feet (and sometimes "streamlined" feet) and handle at the top were needed by the salesmen during the presentation.
Competitors: Knock off competitors that showed up when Dad retired include Neo-Lite, Glo-Dial, Roto-Dial, and Federal Neon Clocks.
This last one was, Ron believes, was a start up by our Pennsylvania sales manager either just before or after Mannie sold the company to Tel-A-Sign of Chicago, Ill.  TheChicago firm pretty much let the company die as they were into a more modern and much simpler type of signs that respected the new interstate highway system and the dying small rural towns in America.
Model names etc.: The list of model names below is not complete, as some models are obviously missing, such as the "exposed ring" and the "Aztec" clocks, as well as some of the more rare clocks that were incorporated into large signs. Additionally, some of the info is a little confusing, particularly relating to the "dial pan" clocks with Plexiglas faces. As always, please contact the web site editor at dwalker127@neonclock.org if you have information that can help clear this up.
General Nomenclature: Note some of the following can be verified in the sales brochure offered here.
- "P" stood for "Plexiglas", which was made by Rohm and Hass.
- "L" Ron believes stood for "lighted".
- "A" may have stood for "Advertising" (web site editor's note: it's possible this stood for "Animated" as noted on the back of the "APL" advertising card, see below).
- "D" stood for double-sided
are round clocks (PL-T is a thermometer) with inside neon tubes.
- PL-3 which was the first of the Plexiglas clock signs that made it into mass production. The red white and blue PL-3 was probably the all time best selling clock (web editor's note: from this statement, I believe Ron is referring to what we call the "dial pan" clocks, those with the Plexiglas face, as those were the only models with red/white/blue color schemes. However, this is a little confusing as related to the "APL-2" clocks mentioned below).
-  PL-4 ("target" clock) was a nice improvement over the earlier models in that the neon tube’s light was better diffused, allowing better illumination of the inside coloring on the face. Click here to see more of this style. 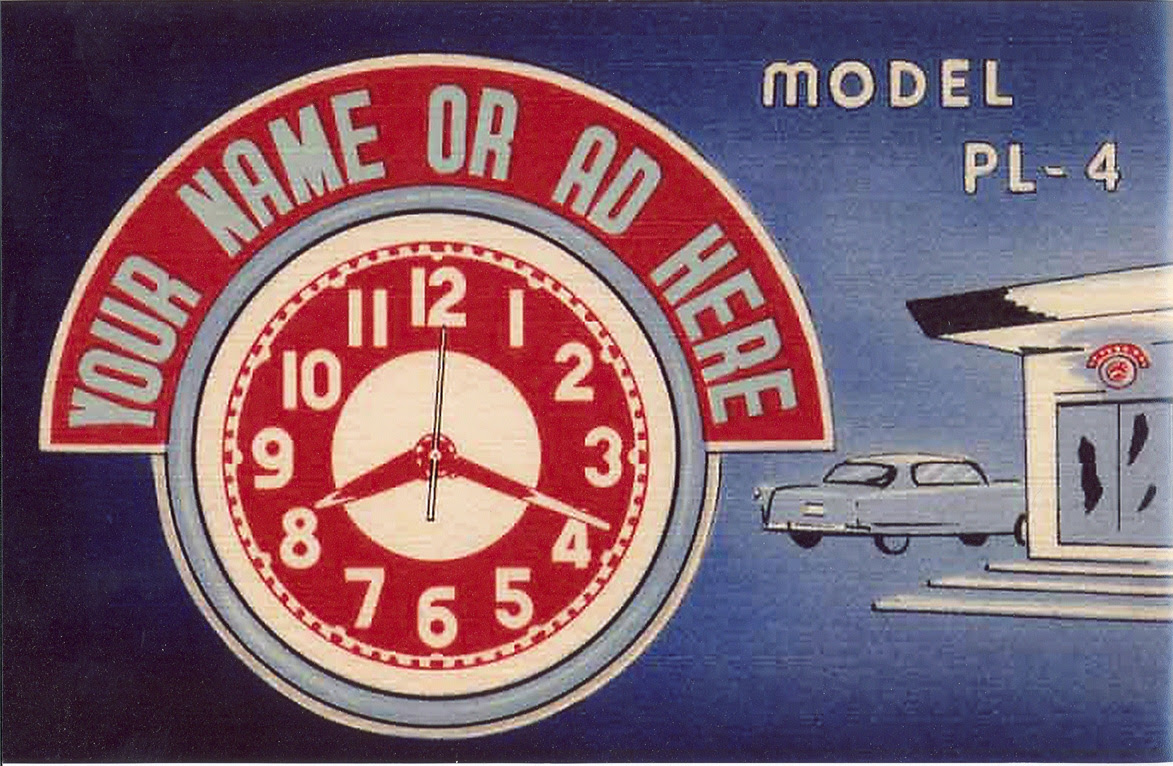 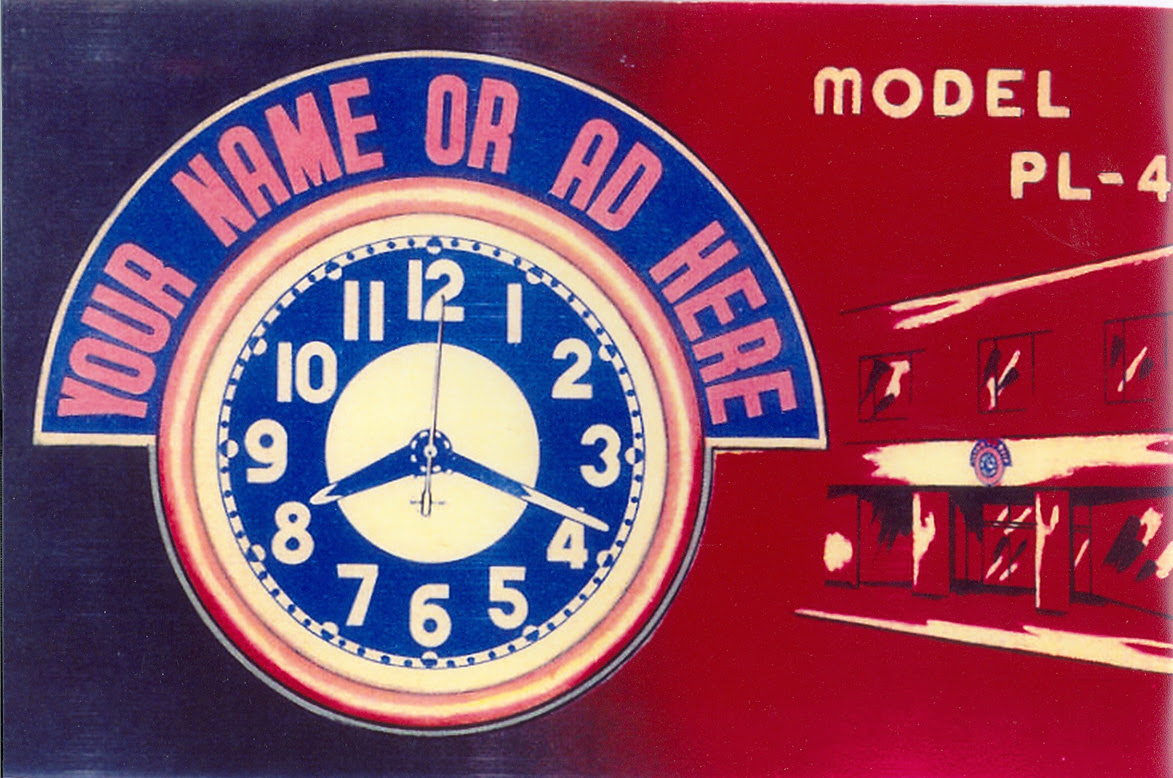 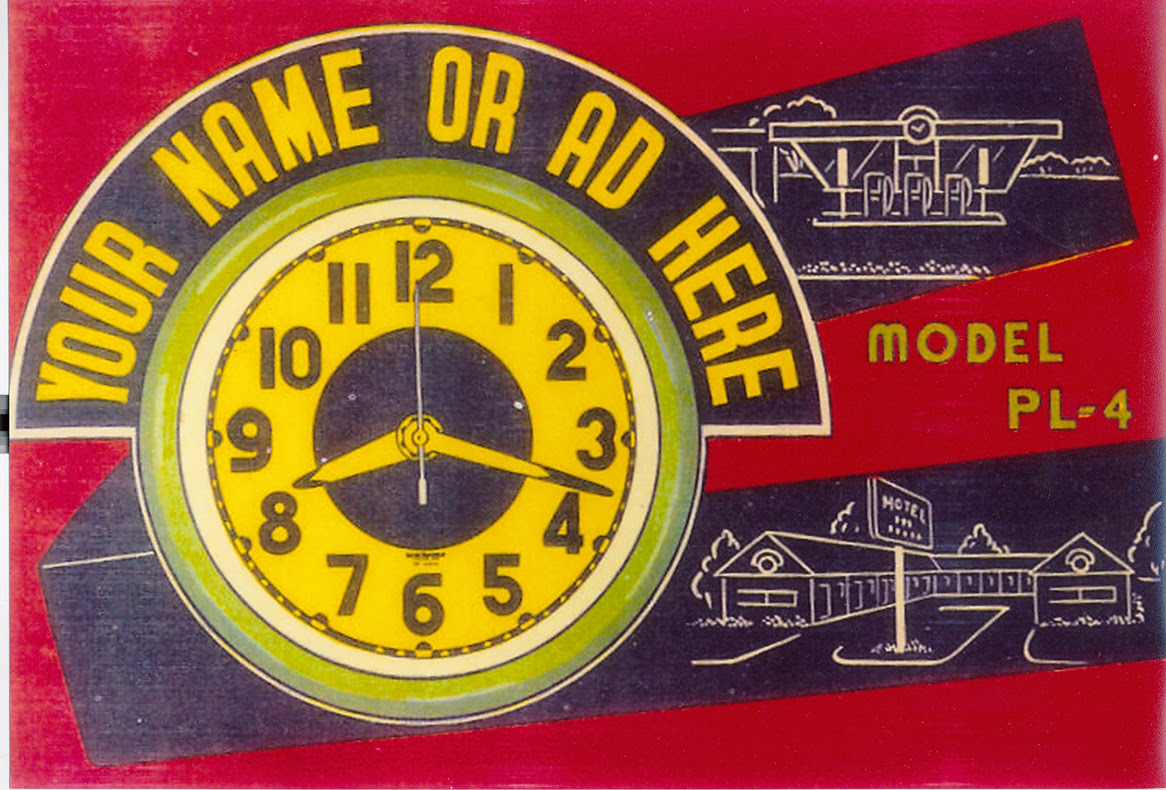 - PL-5 is the standard Plexiglas clock with the metal face.  Click here to see more of this style.

- APL - This clock with the eye catching inside animated dial was modeled after a Swiss watch that came from one of Mannie's European trips.   Click here to see more of this style. 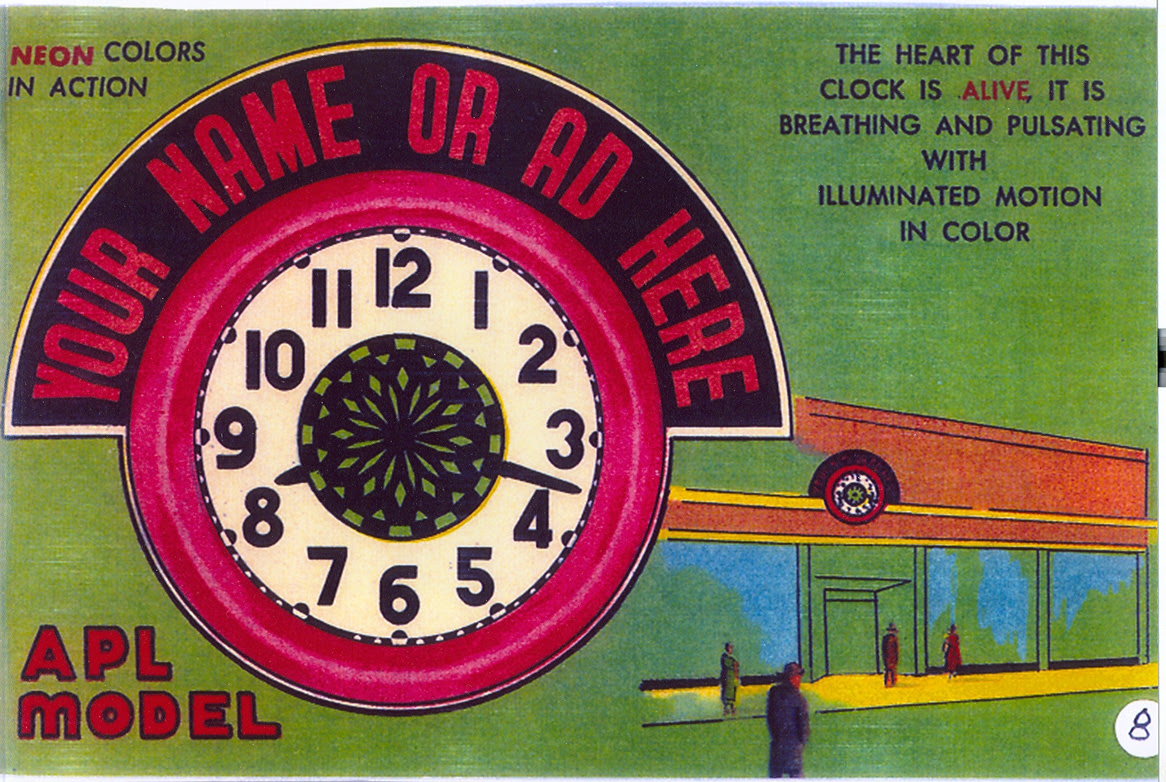 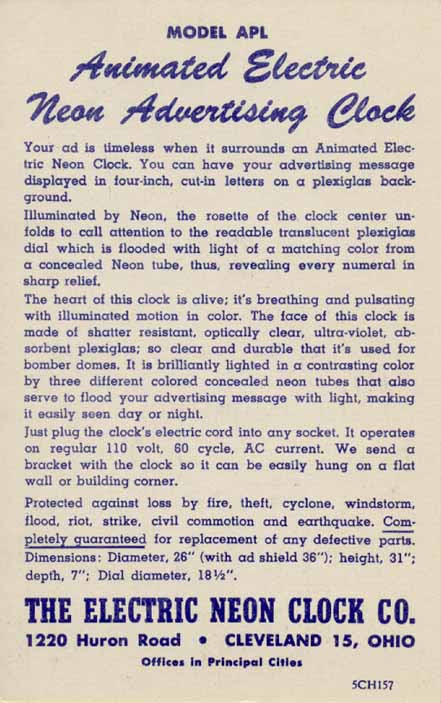 - APL-2 is the standard "Plexiglas dial" clock (no illusion wheel) (web editor's note: This is a little confusing with the "Pl-3" comment above.)  Click here to see more of this style.

- PL-T were thermometers that used the same construction methods as the clocks. We went back to clock clients and sold this as a add on.
- H - The 8-sided clock. (web editor's note: I believe this may be referring to the standard octagonal clock, similar to the hex). Click here to see more of this style.

- BH - Square Clock was the BHS (single sided) or BHD  (double sided). Click here to see more of this style.

Colorlite - Sales brochures for the hexagonal clocks refer to them as the "Colorlite Electric Neon clock". (
Derik Lattig says Exposed Ring clocks - As mentioned above, we don't know the "official" name of these clocks, but here is a photo of one that was recently found still in it's original shipping box. It had never been removed (a 70 year old virgin!). 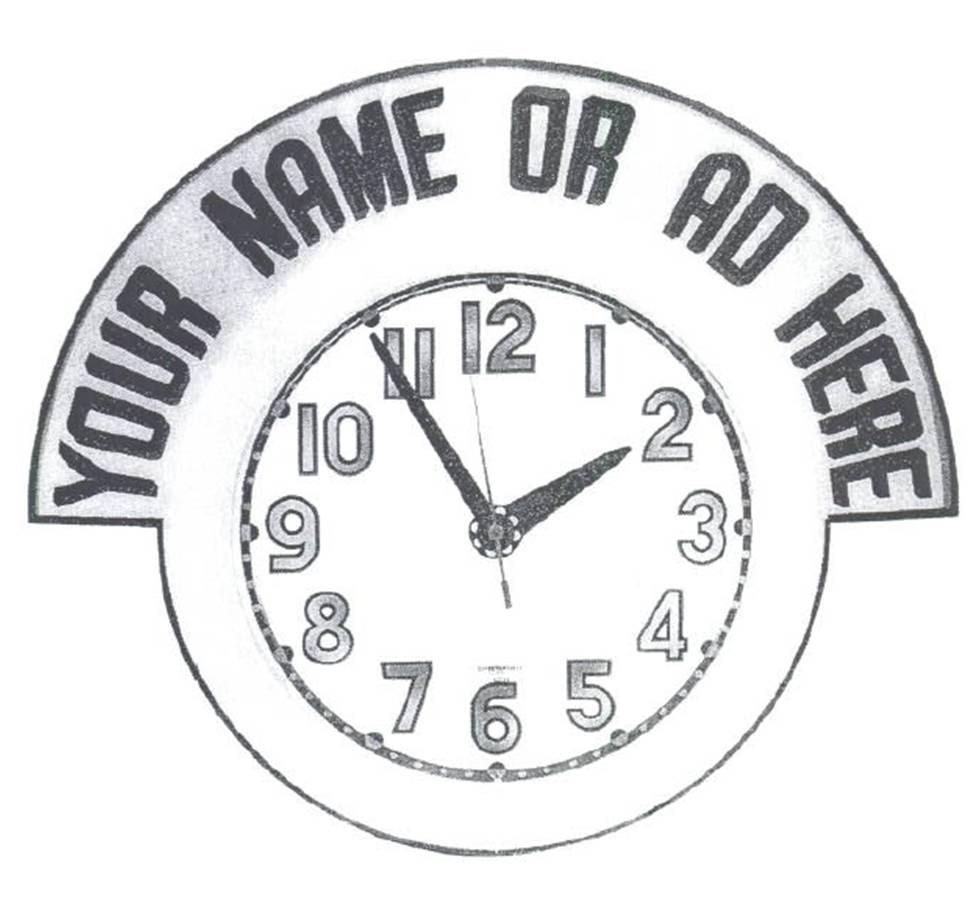 Here is a sales brochure from the latter days of the company. In it they adverse the Models H (octagon), PL-5 (standard Plexiglas, metal face), APL-2 (Plexiglas dial pan), BH (large square clock with clipped corners), and different mounting brackets.
Other info:
may have what he believes is one of the earliest clocks made by The Electric Neon Clock Co.  It is nothing like what we have shown and is actually a school room type clock.  It is a slave clock which means that it was controlled from the principals office. It clearly says The Electric Neon Clock Co. and Cleveland, Ohio. It also says Hammond Synchronous Movement.  (web editor's note: I believe Ron is referring to non-lighted clocks which surface occasionally as wall clocks, or as desk clocks.)
Other literature that he has on the above pictured products refer to Synchron movement that never requires lubrication or care.  It also says that the movement was manufactured to work perfectly even under extremities of heat or cold.  Other details were the usage of 20 gauge steel and Baked enamel finish. The way these clocks have held up has shown the brochures to have been correct.
Serial Number History: The link takes you to a page with information that been compiled by the web editor. One of the things we find intriguing about these clocks is the serial numbers that appear on the face labels of some clocks. Presumably, we might compile a manufacturing history of these clock models based on these serial numbers, if they are indeed "serial". #DerikLattig #LattigDerik