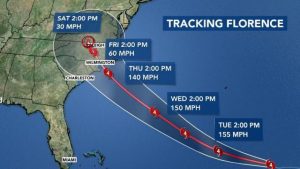 Capitol Broadcasting tweeted Tuesday that WRAL (NBC) crews were “equipped with drones and ready to tell the story of Hurricane Florence.”
While drones have been used over the last few years to track recovery efforts following major storms, independent drone operators often get in the way of the big boys directing rescues or operators themselves become part of the problem by ending up in a shelter once their food and gasoline run out.
The State of North Carolina appears to be ahead of the curve in it’s effort to mount a coordinated drone response.
The North Carolina Department of Public Safety had previously created the North Carolina Unmanned Aerial System (UAS) Disaster Response Database (https://www.ncdps.gov/uas)  to provide local emergency managers and first responders with a list of qualified remote pilots who are willing to provide services to their community.
This is an example of a well-conceived effort by an official state resource to provide a coordinated UAS response for incidents like Hurricane Florence.
Instead of rushing toward the Carolinas, savvy and responsible remote pilots will take this moment to pause and plan.
It will be interesting to see images provided by station drones later this week and a lot cheaper for broadcasters who traditionally rely on choppers for coverage.